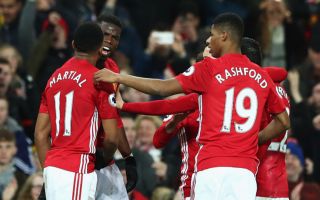 Man Utd could be without Anthony Martial for their encounter with Southampton on Saturday as the Frenchman wasn’t seen with the rest of the squad at the Lowry hotel.

Martial missed the win over Crystal Palace in midweek with a groin problem, although his absence didn’t hurt the Red Devils significantly as they secured a 3-1 victory at Selhurst Park with the likes of Marcus Rashford and Jesse Lingard also missing from the starting line-up.

Nevertheless, given the form of that trio under interim boss Ole Gunnar Solskjaer since he arrived in December, the Norwegian tactician will be desperate to get them back to full fitness sooner rather than later.

Martial has scored 11 goals and provided two assists in 28 appearances so far this season, but he will seemingly be unable to add to those tallies on Saturday as The Mirror report that he wasn’t spotted arriving with the rest of the United squad at the Lowry ahead of the Southampton clash.

Given Solskjaer had already hinted that he wouldn’t rush his players back from injury in his press conference on Friday, as seen in the tweet below, it would appear as though Martial won’t be risked and will hope to be available when Man Utd face Paris Saint-Germain in the Champions League on Wednesday night.

Coupled with the likes of Nemanja Matic, Ander Herrera and Juan Mata all picking up problems over the past week, it will really continue to test the depth in this United squad as they try to compete on multiple fronts.

This weekend’s encounter with the Saints is fundamental to their chances of a top-four finish in the Premier League too, as a win could move them back into fourth with Arsenal facing rivals Tottenham in the north London derby.

OGS. "It’s the last session today but we’re not going to take any risks." Martial (groin) has an outside chance, but following Lingard's setback, United may err on the side of caution & give him a few extra recovery days. "The squad will look similar to what it did on Wed." #MUFC