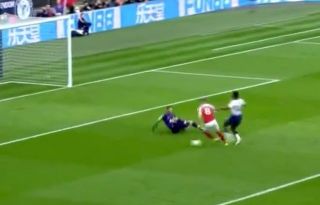 Aaron Ramsey broke the deadlock in the north London derby against Tottenham on Saturday with a fine individual finish after some poor Spurs defending.

As noted on the Juventus club site, the Welshman is set to join the Turin giants this summer, and so this will be his last derby for Arsenal against Spurs.

With that in mind, he could go out in style as he pounced on some poor Tottenham defending and a swift, direct Arsenal move to go clear against Hugo Lloris, as seen in the video below.

He kept his composure thereafter as he went past the French goalkeeper and passed the ball into an empty net to give Arsenal the lead in a crucial encounter.

Unai Emery knows his side can move to within just a point of third-placed Tottenham with a win, and scoring the first goal in the showdown could be decisive.

Ramsey opens the scoring in the NLD. Stunning #afc pic.twitter.com/ByJEtgryC0