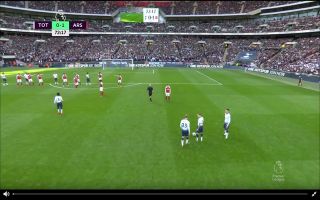 Tottenham talisman Harry Kane got back Spurs back into the north London derby by drawing a foul in the box and converting his penalty in expert fashion.

In the 72nd minute of the tie, a lapse in concentration from Arsenal’s defence (something fans will have been accustomed to by now) led to the referee pointing to the spot. Defenders Laurent Koscielny and Shkodran Mustafi decided to foul Kane even though the England captain was offside.

Mustafi had absolutely no reason to shove Kane in the back and Arsenal have lost the opportunity to come out of this clash with three points because of his mistake.

He looked to be offside before the spot-kick was given, even sweeter!#THFC #COYSpic.twitter.com/g0jGVePLXt

Arsenal seriously need to sort their defensive woes out, without sounding like a broken record they have the same weaknesses that they had when Arsene Wenger was in charge.