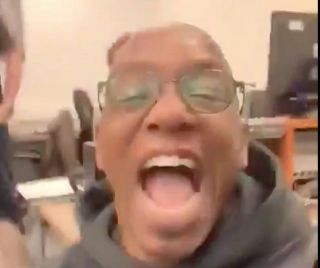 Aaron Ramsey broke the deadlock for Arsenal in their clash with Tottenham at Wembley on Saturday, and it’s fair to say Ian Wright enjoyed it.

The Welshman broke free of the Tottenham defence and kept his cool to round Hugo Lloris and find an empty net to put the Gunners ahead in a crucial encounter.

A win would move them to within just a point of their local rivals in third place, and so it undoubtedly means a lot both in terms of pride and the standings in the Premier League.

While it was a brilliant goal, Wright clearly loved every second of it as his reaction was posted on the 888sport account, as seen in the video below.

The Arsenal legend will undoubtedly be hoping that his former side can now hold on to their lead and come away with three points, with Bernd Leno producing some stunning saves in the first half to protect their advantage as Spurs will certainly continue to be a threat after the break.