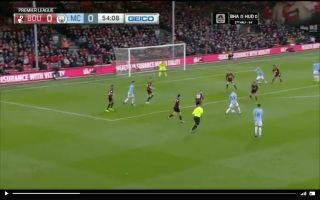 Manchester City attacking midfielder Riyad Mahrez has finally broken the deadlock against Bournemouth after 55 minutes, take a look at the star’s tidy finish.

City full-back Oleksandr Zinchenko turned into his twin Kevin De Bruyne when he popped the ball up to midfield maestro David Silva, the Spanish star beautifully chested the ball before his pass found it’s way to Mahrez.

The Algerian star managed to fire the ball into the back of the net despite being at such a tight angle and with two defenders in front of him.

City had been struggling to break the deadlock but Mahrez seemed to hold the key to beating the defence, City fans will be hoping that Mahrez can build from this performance.

Contact made: Barcelona in talks over €24m sale of talented youngster