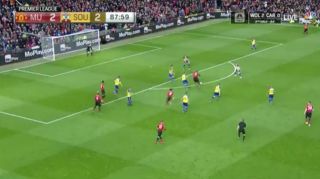 Romelu Lukaku ended up being Man United’s saviour this afternoon, as the forward bagged a late winner for the Red Devils in their clash against Southampton at Old Trafford.

United were pegged back by Saints midfielder James Ward-Prowse just 15 minutes before full time, however the home side responded right at the death through a fine finish from Lukaku.

The ball was given to the Belgian by Fred, as he fired home with his weaker right foot from outside the box to wrap up all three points for Solskjaer’s side.

You can check out the goal down below. Scenes at Old Trafford!

Video: Lukaku scores in his own net to hand Sevilla a late lead in the Europa League final
More Stories Romelu Lukaku

Video: Lukaku fires Inter ahead against Sevilla from the spot August 21, 2020 20:21
Europa League