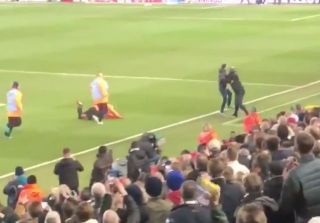 West Brom suffered a heavy 4-0 defeat to Leeds United on Friday, but one fan took things a bit too far at Elland Road in their Championship clash.

It was a damaging loss for the Baggies in terms of their hopes of automatic promotion back to the Premier League, as they sit six points adrift of second-placed Norwich City who also have a game in hand.

As for Leeds, their win moved them back to the top of the Championship table, but as seen in the video below, one fan couldn’t contain his delight.

After giving the stewards the runaround on the pitch, he made his way towards the dug out and Moore decided that it was time to step in and hold onto the fan in question to allow the stewards to catch up and take him away.

Naturally, some will find his antics hilarious, especially when the stewards make such a mess of trying to catch him. You’d think they’d have some sort of training for this kind of thing…