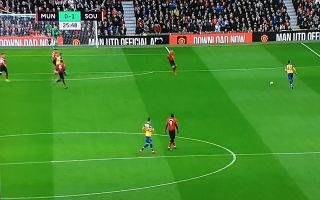 Some fans have slammed Manchester United goalkeeper David De Gea after he was beaten at his near post by a long-range effort from Southampton’s Yan Valery.

Southampton delivered the Red Devils a shock when they took the lead in the 26th minute after Valery’s long-range effort flew into the top corner – at first glance the strike looked like an absolute thunderbolt, but rival fans believe De Gea should have done better.

De Gea’s 350th appearance for United certainly hasn’t got off to a great start.

The Red Devils can’t afford to lose this afternoon, with Arsenal vs Tottenham ending in a draw – the chance is there today for United to make some ground on their top four rivals, a loss against relegation candidates Southampton would certainly dent their hopes of finishing in the top four.

Wow. What a goal from Valery. Just imagine your fav goalie was scored from there. Don't @ me. Leno >>>>> De Gea#MUNSOU #MUFCpic.twitter.com/M9u559pNql

Check out some reaction:

De Gea beaten at the near post again loooool pic.twitter.com/1z2IcQaMUH

These fans clearly think that United not giving into De Gea’s contract demands is the reason for the error:

De Gea holding the club to ransom until you give him the money. Prime contract extension De Gea saves that every time.

De Gea has to save that, Shaw has to close him down, and we should have scored twice already.

When it’s not straight at De gea he can’t save it. That was a simple save https://t.co/4tQ82dFmRr

De Gea has to save that

How the fuck did De Gea not save that… we’ve been shambolic so far. #mufc

De gea has to save that…

That small save De Gea can't save..i don't rate him at all?

Pretty poor by de Gea. Should save that

De Gea is still obviously one of the world’s best goalkeepers but unless he improves in this area, the blueprint is out on how to beat him.