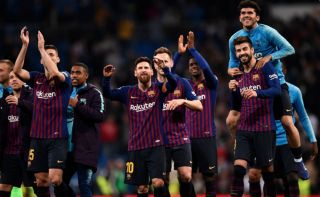 Barcelona beat Real Madrid yet again on Saturday evening, as the Blaugrana increased their lead at the top of La Liga to 10 points.

A goal from Ivan Rakitic midway through the first half proved to be the difference in the end, as Ernesto Valverde’s side won away at the Santiago Bernabeu for the second time in four days.

Barca now sit 10 points clear of second place Atletico Madrid in La Liga, as well as 12 points ahead of Real themselves, something that effectively puts Los Blancos out of the title race once and for all.

Given their win on Saturday, Barca have now won their last four league games against Real at the Santiago Bernabeu, a feat that’s never been achieved before in La Liga history.

They did it again.

Barcelona are the first team in @LaLigaEN history to win four consecutive away games against Real Madrid ?#ElClasico pic.twitter.com/OAefQm7EX0

Barcelona were largely dominant in their win over Real on Saturday night, and Los Blancos can be thankful the score only ended up being 1-0 in the end.

Barca had a whole host of chances throughout the game to extend their lead over Real, however they only needed one goal in the end, as Los Blancos failed to find a way past Barcelona’s defence throughout the entire 90 minutes.

Given their loss to Barca in the Copa Del Rey earlier this week, as well as their defeat yesterday, Real will now be banking on winning the Champions League in their attempts to avoid ending the season without silverware.