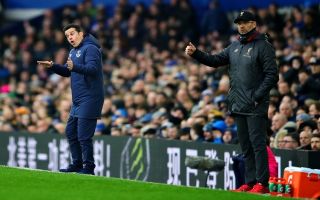 The scores remain even at halftime in the Merseyside derby, check out some reaction to the proceedings so far from these Liverpool fans.

The Reds have dominated possession against their Merseyside rivals in the first-half, despite their dominance with the ball, Jurgen Klopp’s side failed to create enough clear-cut chances that would see them head into the halftime break with a lead.

The best chance of the half fell to superstar Mohamed Salah in the 27th minute, the Egyptian burst through on goal one vs one but his attempt at goal from a tight angle was blocked by England’s first-choice goalkeeper – Jordan Pickford.

Tempers have flared so far – there’s a certain intensity that both teams are playing with and it’s the type that could spark fireworks in the second-half. There are tough challenges flying around everywhere and this could develop into the kind of match where the referee will need to reach into his pocket quite a few times.

Check out the stats from the opening 45 minutes below:

Cagey first half in the Merseyside Derby with chances few and far between. pic.twitter.com/kQr4M7ZMPS

Liverpool look as though they are playing with the right intensity – but they’re missing that little extra bit of creativity, that could have seen them in the lead heading into the break.

Such a boring game just like the Man United game ?

I think it’s time to bench Salah for big Shaq just to wake him up. He is not playing like he is supposed to.

If we dont win this game, we dont deserve the league. Simple.

Gini is out of it today ! Bring in Keita and also if Bobby is fit , bring him in for Origi ! #LFC #YNWA #EVELIV #LFCFamily

I am disappointed that Salah misses those finishes

If you don’t want Keita why buying him. He won’t improve from the bench.

When will Salah play well again? ??

This seems a little out there: