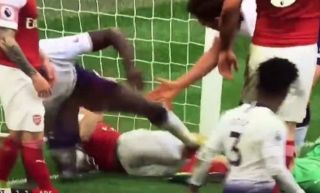 Tottenham got lucky when Harry Kane escaped retrospective punishment for his ‘sort of headbutt’ on Chelsea’s Cesar Azpilicueta, but Davison Sanchez is surely facing a three-match ban after clearly stamping on Arsenal defender Laurent Koscielny.

The Colombian centre back planted his studs into Koscielny’s knee away during Saturday’s 1-1 draw at Wembley.

In fairness to Koscielny, he did not milk it so referee Anthony Taylor did nothing to deal with the incident at the time.

This makes it even more likely that the FA will investigate and, unless they believe Sanchez’s stamp was a mistake, the Spurs man seems bang to rights.

Stamping on an injury-prone player who is sitting defenceless on the ground is nothing short of cowardly and certainly warrants a charge of violent conduct.

If banned for three games, Sanchez would miss Tottenham’s trip to Liverpool on March 31.