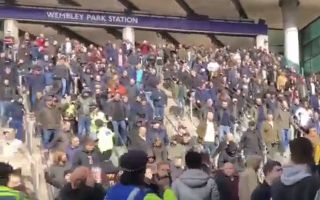 There was violence on the pitch at Wembley with Davinson Sanchez stamping on Laurent Koscielny but there was also aggro between fans in north London on Saturday.

Before the match an Arsenal fan was hit with a bottle of beer on the steps of Wembley Park tube station, as reported by The Sun.

Look out for the Arsenal fan getting pinged on the head by a drink ??#TOTARS pic.twitter.com/TJUaSBtQeR

The Gooner was seemingly targeted because he and a group of other supporters were signing: ‘Arsenal, Arsenal’.

Footage of the shameful incident was shared on Twitter.