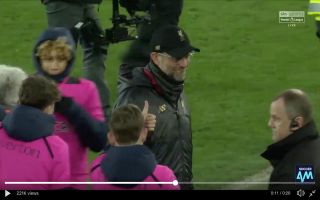 Liverpool manager Jurgen Klopp got a taste of his own medicine after the Reds’ goalless draw with Merseyside rivals Everton today, take a look below.

Klopp was taken aback by the ballboy’s decision to sarcastically applaud him off the pitch at Goodison Park, Klopp looked quite angry and it’s clear to see that he saw the ballboy’s action as quite disrespectful.

The young ballboy didn’t back down when Klopp confronted for his actions, the youngster continued to clap in the face of Klopp and even showed him a sarcastic thumbs up – fairplay to the lad for standing his ground.

Check out a video of the hilarious incident below:

Klopp can’t complain too much about the incident – the ballboy’s actions could be revenge for Klopp’s distasteful celebrations after Liverpool’s last-gasp winner in the reverse of this fixture, earlier in the season.

Liverpool are now trailing league leaders Manchester City by one point, considering that the Reds were ten points clear at one stage of the season, their fans will be distraught if they lose out on the title to Pep Guardiola’s City.