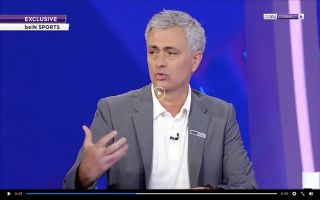 Former Chelsea, Inter Milan, Manchester United and Real Madrid manager has revealed what Liverpool superstar Mohamed Salah was like during his time at Chelsea.

Mourinho was questioned about Salah whilst working as a pundit for beIN Sports, the 56-year-old spoke of how Salah was “lonely, naive and physically fragile” when he arrived at Chelsea from Basel.

Salah joined Chelsea when he was just 21 years old and he failed to live up to hype that was around him at the time, this led to the west London club shipping him out on loan to Italian sides Fiorentina and Roma.

Salah made just 19 appearances across all competitions for Chelsea, the Egyptian joined Roma permanently in the summer of 2016 after a successful loan spell with the club.

Whilst it may appear that Mourinho was being quite damning of Salah, the Portuguese football icon was actually very complimentary of the Egyptian star and it’s clear that he thinks it was the right decision for Salah to move to Italy and develop himself as a player.