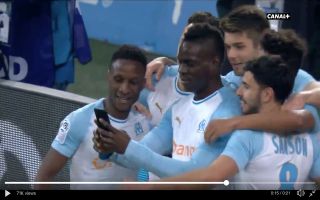 Mario Balotelli has turned on the style for Marseille tonight, super Mario scored a scissor kick and then celebrated with a selfie uploaded to his Instagram

Balotelli scored in the 12th minute of Marseille’s clash against St. Etienne, Balotelli scored a scissor kick from close range after a lovely corner from former Newcastle winger Florian Thauvin.

Scoring acrobatically wasn’t enough for the Italian, the former Manchester City ace then ran to a cameraman to get his phone, the 28-year-old then filmed a selfie video with his teammates which he uploaded to his Instagram story.

What a goal from Balotelli !

Check out the video that Balotelli uploaded to his Instagram story:

Let it be known that Mario Balotelli never ceases to amaze.

Contact made: Man United eye move for La Liga star who has a release clause of only €25m
More Stories Mario Balotelli