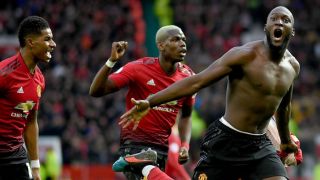 The Red Devils continued their impressive form under interim boss Ole Gunnar Solskjaer with a hard-fought 3-2 win over Southampton on Saturday.

Lukaku has enjoyed a great week as after scoring a brace against Crystal Palace in midweek, the Belgian international repeated his feat against the Saints to move United back into the top four.

Unsurprisingly, he has done enough to get into Crooks’ line-up, as seen below, and he’s joined Troy Deeney and Wilfried Zaha in a three-man attack, with both forwards getting on the scoresheets in wins for Watford and Palace respectively this past weekend.

That theme of picking goalscorers continues into the midfield, with both Jorginho and Andreas Pereira on the mark in wins for Chelsea and Man Utd, although Liverpool captain Jordan Henderson eventually breaks the trend as he completes the midfield after putting in a solid display in the Merseyside derby.

Virgil van Dijk was equally as impressive in helping the Reds keep a clean sheet, and although there will be disappointment for Jurgen Klopp as Man City now sit top of the standings given their recent stumbles, he will surely be pleased with how that duo performed in a crunch showdown with their rivals.

After a thrilling north London derby on Saturday, Hugo Lloris and Jan Vertonghen get the nod at the back, as they combined to deny Pierre-Emerick Aubameyang a late winner.

It was the World Cup winner who stopped the spot-kick initially, before his Belgian defender produced a heroic last-ditch block to deny what looked like a certain goal at the second attempt.

In turn, that alone arguably justifies his selection, albeit he did defend well throughout, as did Sokratis at the other end for Arsenal in keeping Tottenham’s attacking threats quiet for the most part.

Palace’s Aaron Wan-Bissaka completes the line-up at left-back after another impressive display this past weekend, and so it could be argued that Crooks has put together a decent XI this time round, aside from the tendency to prefer those who scored.

However, naturally this feature is down to opinion, and so many will be left disappointed with certain snubs and will question specific picks, as is the case every week.

As for the likes of Lukaku and Vertonghen though, there is surely little argument over their inclusion.