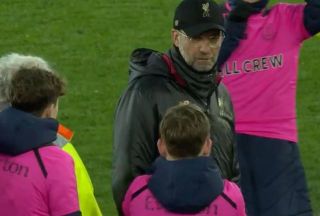 The father of the Everton ballboy who swapped a few words with Jurgen Klopp after the Merseyside derby has revealed what was said between the pair.

As noted by the Liverpool Echo, Klopp had suggested prior to Sunday’s showdown that the derby is “like a World Cup final” for Everton, something that Marco Silva didn’t take too kindly to.

It’s now been revealed that was the topic of conversation between the German tactician and the Everton ballboy after the game, as the video below shows the pair exchanging words.

Klopp initially looked less than impressed but made his way down the tunnel with a smile on his face, and the father of the ballboy in question has now revealed that not only was it in reference to Klopp’s pre-game comments but that it was all good-natured fun too.

“Just a bit of banter between Charlie and Klopp at the end,” he is reported to have said, as per The Sun.

“No threats by Klopp or Charlie! All good-natured – what the derby is all about. Charlie just asked him what he thought about the World Cup final.”

The young lad appears to have been a little bit too cheeky with his sarcastic clapping and thumbs up at the Liverpool boss, but it was all a bit of ‘banter’ between the two as the Merseyside rivals were forced to share the spoils in a goalless draw at Goodison Park.

The result now leaves Liverpool in second place in the Premier League table, as they trail title rivals Manchester City by one point.