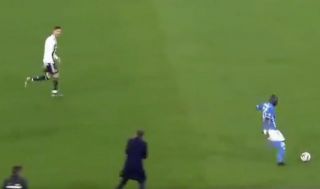 Juventus may well have secured a 2-1 win over title rivals Napoli on Sunday night, but Cristiano Ronaldo wasn’t entirely happy during the game.

The victory moved the Turin giants 16 points clear at the top of the Serie A table, as it would appear as though it’s inevitable that they will win an eighth consecutive Scudetto.

Goals from Miralem Pjanic and Emre Can secured all three points on Sunday in Naples, but always striving to improve, Ronaldo wasn’t happy just after the hour mark as Juventus looked to hold onto their lead.

As seen and heard in the video below, the Portuguese superstar turns to coach Massimiliano Allegri and yells: “Mister!”.

Just seconds before that, Ronaldo appears to be the only Juventus player pressing with any real intensity in a bid to win back possession, and as he continues to close down the Napoli defence with little support from his teammates in the second line behind him, he appears to look to Allegri for help.

That seems to be the most plausible explanation as to why he was so frustrated, although ultimately it can’t be confirmed until he says so.

Nevertheless, he would surely have been a happy man at the end of the game with the three points ensuring that Juventus continue to march towards another league triumph.