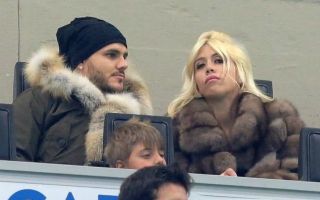 Wanda Nara, the agent and wife of Inter striker Mauro Icardi, has insisted that she isn’t to blame for putting Real Madrid off from signing him.

The Argentine’s future at Inter looks bleak after he was stripped of the captaincy last month and has since been absent from every squad due to injury.

SEE MORE: Boost for Man Utd, Real Madrid as prolific 133-goal ace could be available for bargain €50m or less

Speculation over his future refuses to go away, with Nara playing an active role in his contract renewal talks previously as well as doing TV work on Italian show Tiki Taka.

As she continues to create headlines with her comments and while Icardi remains sidelined, it’s unclear what will happen this summer. However, she is adamant that she hasn’t cost her husband a big move to Real Madrid.

“That Mauro hasn’t gone to Madrid because of me, as has been said in Spain, is false and we have a lot of respect for Real Madrid,” she said, as per Marca.

It remains to be seen if a move to the Bernabeu still materialises this summer, with the report above even noting that Icardi could be available for €50m or less as a result of his issues with Inter.

Given he has established himself as one of the most prolific strikers in Europe at the San Siro, it has to be said that it’s difficult to see why Real Madrid wouldn’t swoop if he was available for such a bargain price.

Perhaps that would then indicate that the way in which his situation at Inter has been handled has been noted by the Spanish giants, who could then opt to stay clear of any potential drama with Nara and Icardi in the future.