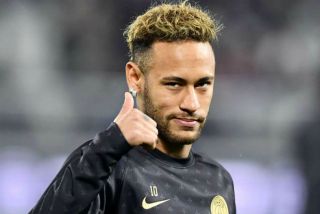 Neymar has responded to questions over a potential move to Real Madrid in the future, but has seemingly allayed any fears Paris Saint-Germain might have.

The 27-year-old joined the French giants from Barcelona in 2017, and has gone on to score 48 goals in just 53 games for them despite lengthy spells on the sidelines due to injury.

With a whole host of domestic silverware added to his trophy collection, it would appear as though Neymar is happy in the French capital, and he has reiterated that when asked about the possibility of a move to join Real Madrid.

While he does concede that any player would want to play for Los Blancos given the size of the club, it doesn’t sound as though he’s in a huge hurry to leave PSG.

“If I want to play for Madrid? They are one of the biggest clubs in the world,” he told Globo TV, as noted by Marca. “Any player linked with Real Madrid would feel attracted to player there.

“For the love of God, I am not speaking about playing for Madrid, calm down. I feel happy in Paris, I am very well here… but, in the future, nobody knows.

“It is obvious that Real Madrid are a great team, one of the best in the world, I have great respect for them but, today, I see myself in Paris.”

Such a move surely wouldn’t go down well at former club Barcelona, where Neymar enjoyed a hugely successful stint alongside the likes of Lionel Messi and Luis Suarez.

Joining their bitter rivals would arguably tarnish his reputation with Barcelona fans, but ultimately it remains to be seen what he believes is best for his career if he does decide to end his adventure in Ligue 1.

For now, his priority will be recovering from his latest foot injury, as PSG will be desperate to get him back on the pitch sooner rather than later to spearhead their efforts to win the Champions League this season.