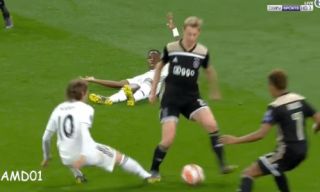 Ajax midfielder Frenkie de Jong is enjoying himself this evening as his side surprisingly lead Real Madrid in the Champions League.

Watch below as the young Dutchman, who will join Barcelona in the summer, leaves Ballon d’Or winner Luka Modric on his backside in some style.

Frankie de Jong putting the best player in the world on his backside ?#REAAJA #AJAX #UCLpic.twitter.com/WBsCdT7vsq

De Jong shows great feet to shuffle his way past the Croatian in a moment to show his superb potential.

Barca fans will surely be just itching for this man to make his way over to the Nou Camp!