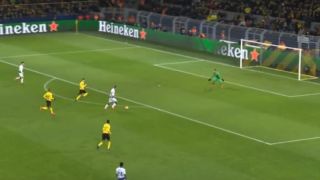 Harry Kane has scored a superbly-taken goal for Tottenham against Borussia Dortmund this evening to surely all but end this Champions League tie.

Spurs now lead 4-0 on aggregate and have a crucial away goal, meaning Dortmund now need five in what remains of tonight’s match in Germany.

Kane has been a world class performer for Tottenham down the years and he’s done it again here with a big moment in a big game.