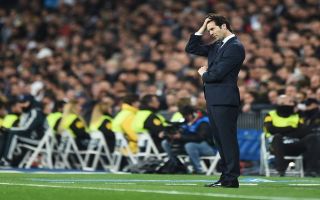 The past week has been embarrassing for Real Madrid, Los Blancos have lost the chance to win any competition that they’ve been a part of in the last week.

Real Madrid certainly weren’t at the races at the Santiago Bernabeu this evening against Ajax, the Dutch underdogs tore apart the reigning Champions League winners in superb style in their 4-1 victory.

The shock loss to Ajax comes after two defeats to Barcelona in the past week, the first coming in the Copa Del Rey and the second coming in the league – but more importantly all these losses came at Madrid’s home.

Santiago Solari gave Madrid fans hope after a great run of results since taking charge from the doomed Julen Lopetegui, it looked as though Madrid could come out the season with at least the Copa Del Rey – but the wheels have fallen off the wagon in the past week.

Barcelona perfectly highlighted that the side’s are at different levels in their two wins last week. Santiago Solari’s job could be on the line following the poor results over the last seven days.

The stat showing just how bad Madrid’s home form has been was unearthed by SofaScore:

?Out of the #UCL
?Out of the Copa
?12 points behind Barcelona in La Liga

Madrid will need a massive summer transfer window to take back their place as the best in the world after what has turned out to be a extremely underwhelming season.