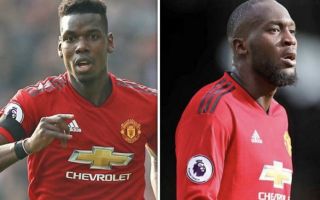 Man Utd striker Romelu Lukaku is in fine form right now, and he appears determined to avoid being distracted by speculation off the pitch.

The 25-year-old has bagged four goals in his last two appearances for the Red Devils, helping Ole Gunnar Solskjaer’s men to wins over Crystal Palace and Southampton.

Lukaku couldn’t have timed it better given the injury concerns over Jesse Lingard, Anthony Martial and Marcus Rashford, as the Belgian international is certainly proving his worth having recently dropped down the pecking order at Old Trafford.

All isn’t reportedly well though, as The Sun reported on Monday night that Lukaku had a ‘bust-up’ with Paul Pogba after the Southampton win, which revolved around the Frenchman taking the late penalty, and missing, thus denying Lukaku the opportunity to bag a hat-trick.

It’s even suggested that the Solskjaer had to step in and calm the pair down as Lukaku felt aggrieved that he wasn’t given the penalty by his friend and teammate.

As seen below, it didn’t take long for the forward to seemingly comment on the situation, as he suggested that the reports were lies.

Although he doesn’t specifically refer to the Pogba speculation, the timing of his tweet just hours after the report was published would offer a major indication at least that he wanted to dismiss it as being inaccurate.

With United fighting for a top four finish in the Premier League as well as the FA Cup and Champions League, this is exactly what their fans would want to hear as the last thing they need after such an impressive resurgence under Solskjaer is any in-fighting to distract them from turning their season around.

When the hate don’t work they start telling lies…