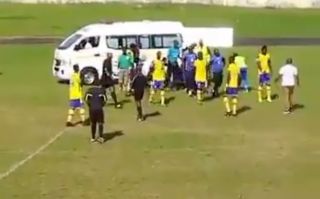 Akanda FC ace Herman Tsinga tragically passed away after collapsing on the pitch during a Gabon First Division clash against Missile FC.

As seen in the video below, an ambulance is seen racing onto the pitch after concern was raised over Tsinga after challenging for a header.

It happened just 23 minutes into the game, with Africa News reporting that he “received a cardiac massage by a military doctor”, but Tsinga died on his way to the hospital.

An inquest will undoubtedly follow into the tragic death of the 30-year-old, with question marks immediately raised over whether or not enough was done, and quickly enough, to save his life.

The Union report that neither ambulance pitch-side had defibrillators or oxygen masks, as per The Sun, but at this stage this hasn’t been confirmed by the relevant authorities.

Meanwhile, thoughts and prayers are with Tsinga’s family at this difficult time, as it would undoubtedly have come as a huge shock to all concerned.

Gabon National Oil-Foot mourning. Akanda FC player Herman Tsinga who died upon his transfer to Owendo CHU after collapsing on the pitch a few seconds after an aerial duel in the 23rd minute of the game against Missile FC in the stage of the INJS. RIP pic.twitter.com/B2dnFu1t3K