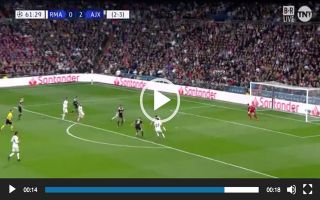 Ajax are now leading Real Madrid 3-0 thanks to a superb strike from magic man Dusan Tadic, the goal wasn’t without drama though, see for yourself below.

Tadic finally got himself on the scoresheet in the 62nd minute after laying on two wonderful assists to his teammates earlier in the game, the former Southampton star scored a world-class goal after a pass from Donny van de Beek.

The Serbian ace controlled the ball with his right before firing it into the top corner with his left-foot, Thibaut Courtois had no chance of stopping this strike.

Tadic is having the game of his life, what a player… pic.twitter.com/yxoodc5Qq2

The goal didn’t come without drama though, VAR was consluted after it appeared that the ball was out of play in the buildup to the goal:

I think the ball is out. pic.twitter.com/bgKIPHuHZK

This looks like a razor-sharp call and I honestly can’t comment on whether it was out or in at this stage.

Real Madrid have found themselves on the end of a giant-slaying and they’re sure to crash out of the Champions League this evening.