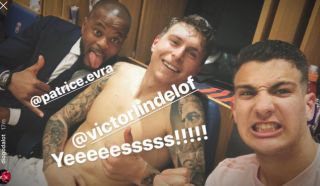 The Red Devils made Champions League history by coming from 2-0 down from the first leg at home to win 3-1 away and go through on away goals tonight.

Unsurprisingly, some big names from United’s past wanted in on the action, as shown in the social media posts below.

Uncle Pat in the United dressing room with Lindelof and Dalot ????? #mufc pic.twitter.com/RGhjY3QBFs

What a night for everyone involved with Man Utd!