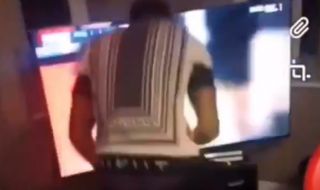 On a memorable night for Manchester United, it’s worth remembering that some of their players couldn’t feature against Paris Saint-Germain this evening.

Ole Gunnar Solskjaer somehow masterminded this incredible comeback with a long injury list, while Paul Pogba was suspended but did make it to the Parc des Princes.

ANTHONY MARTIAL IS ALL OF US ??? #MUFC pic.twitter.com/dem56BEYlQ

Watch below, however, for reaction from Jesse Lingard, Nemanja Matic and Anthony Martial, who absolutely lost the plot as United completed their incredible comeback.

The Red Devils lost 2-0 at home to PSG and looked certain to be heading out of the Champions League tonight with so many injuries against such a top opponent.

Two early goals from Romelu Lukaku helped a lot, however, before Marcus Rashford put away a dramatic penalty late on to make it 3-1.