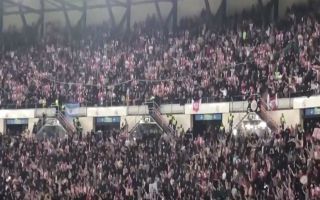 Ajax supporters stayed behind signing long into the night after knocking Real Madrid out of the Champions League in their own backyard.

Goals from Hakim Ziyech, David Neres, Dusan Tadic and Lasse Schone sealed an amazing 4-1 win at Santiago Bernabeu, which saw the Dutch giants progress to the quarterfinals of this year’s competition 5-3 on aggregate.

After the game Ajax supporters stayed behind in the stands for as long as they could, singing at the top of their lungs to the defeated home fans: “Always look on the bright side of life!”

Check out a clip of the Ajax fans in full voice below, via Twitter.

#Ajax and their fans celebrating historic win in the Bernabeu, what an atmosphere!#RMAAJA pic.twitter.com/SBqKK7J8uz