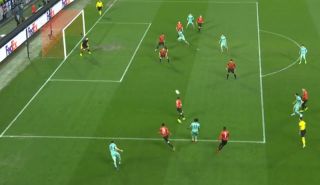 Alex Iwobi scored what was surely a bit of a fluke goal for Arsenal in their Europa League clash with Rennes this evening.

Watch the goal video below as the Nigerian winger seems to be attempting a low cross, which deceives the entire defence and goalkeeper to find its way into the bottom corner of the goal.

Quick feet and a dangerous cross/shot from Alex Iwobi gives the Gunners a big away goal after just three minutes! pic.twitter.com/Zt13aJVz2h

Iwobi won’t care too much, however, with this strike giving the Gunners a potentially crucial away goal in what will by no means be an easy tie.

Arsenal could really do with winning this competition this season if they are to make it back into the Champions League next term.