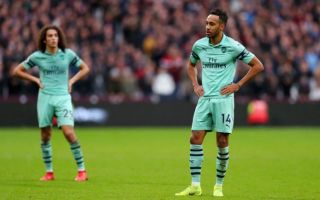 Arsenal fans are almost all venting their anger at Pierre-Emerick Aubameyang this evening after a poor performance in the Europa League away game at Rennes.

The Gabon international can usually be relied on as one of Arsenal’s better players, but he was pretty invisible in France this evening before being subbed off in the second half.

Many Gooners now seem distinctly unimpressed with Aubameyang’s lack of impact in this important game, and it seems Unai Emery must have shared that view.

The Spanish tactician is short of options in attack right now, with Alexandre Lacazette missing through suspension, but still saw it fit to remove Aubameyang from the pitch tonight.

This doesn’t bode too well, and it shows just how bad things are for Arsenal right now that even a world class performer like Aubameyang is getting on the wrong side of fans after struggling to look anywhere near his best in this system.

Aubameyang was an absolute disgrace tonight

Lacazette is better than Aubameyang. #RENARS

Aubameyang: Just had the worst game of his professional career.

Aubameyang has been missing in far to many games for me

@Aubameyang7 maybe you should try turning up for once?? Instead of posting stupid insta stories!!!!! Terrible tonight once again. pic.twitter.com/zSl5N1eXJo

Put that prick Aubameyang on the bench on Sunday. I am done with that fucking sissy!