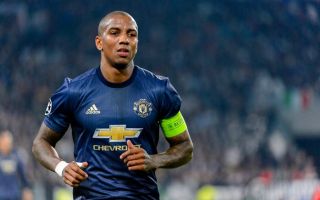 Manchester United star Ashley Young has been in touch with the club’s psychic fan on Twitter ahead of the weekend clash against Arsenal.

The Red Devils stunned Europe with a 3-1 win away to Paris Saint-Germain last night that few could have seen coming or even believed was possible.

One fan predicted it almost perfectly, however, and Young has now tweeted a reply to him promising him a signed shirt from the entire Man Utd squad if he can get his guess correct again for the Arsenal game.

This is quite the offer from the 33-year-old, who was clearly impressed with this clairvoyant fan’s ability to so accurately predict such an improbable score.

United won at Arsenal the last time they played at the Emirates Stadium, beating them 3-1 in the FA Cup.

Could a repeat be on the cards? Let’s see what this psychic fan thinks – if he decides to try his luck and accept Young’s challenge.