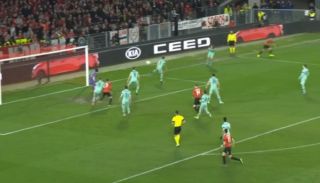 Arsenal somehow find themselves 2-1 down against Rennes this evening as this Europa League game turns into a nightmare for Unai Emery’s side.

The Gunners were in front after just four minutes thanks to Alex Iwobi’s goal, but they’ve fallen apart since then.

Sokratis Papastathopoulos’ red card changed things as Rennes equalised moments after his sending-off, and now Nacho Monreal’s own goal has made it 2-1 to the home side.