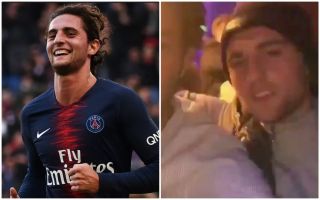 Adrien Rabiot is set to leave PSG on a free this summer, and it would appear as though he’s already checked out having been frozen out of the side.

The 23-year-old hasn’t featured for the Ligue 1 giants since December, as it has since become apparent that he will not sign a contract renewal and in turn will leave the French capital this summer.

With that in mind, he didn’t feature against Man Utd in the Champions League on Wednesday night, failing to be called up to Thomas Tuchel’s squad.

To make matters worse, instead of being present at the Parc des Princes to support his current teammates and club, the video below suggests that the French international was out enjoying himself while PSG exited the Champions League in heartbreaking fashion.

A late penalty awarded by VAR allowed Marcus Rashford to score in injury time to send the French giants crashing out of the competition, but based on the video below, it doesn’t seem as though Rabiot was too fussed about it.

Time will tell where he ends up next season, but it certainly won’t be with PSG as if accurate and this was on Wednesday night, it may not be sending a great message to prospective buyers either…