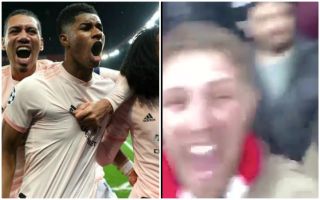 Marcus Rashford sent the away end wild as Man Utd scored a late penalty at Paris Saint-Germain, but one fan made his presence felt amongst the home supporters.

The Red Devils secured a 3-1 win in the French capital on Wednesday night, securing their place in the quarter-finals of the Champions League.

SEE MORE: ‘This is actually hilarious’ – These Man Utd fans love star’s attempt to get involved in celebrations after PSG win

It came in dramatic circumstances though, as Rashford’s injury-time penalty saw off PSG after the Ligue 1 champions had won the first leg 2-0 at Old Trafford.

While the United players raced towards the away fans congregated in the corner behind the goal, a video emerged online on Thursday showing one brave fan who decided to out himself among the PSG faithful and celebrate wildly as he swings his scarf round in the air.

It’s fair to say that the fans around him don’t look particularly impressed with his antics, and he probably got thrown out by stewards shortly after filming this clip.

However, what a night for United fans, and this one in particular who won’t be forgetting where he was when he saw the incredible comeback.

This United fan in the home section has just secured legendary status. Look at those faces around him! pic.twitter.com/uag6pTeF8l