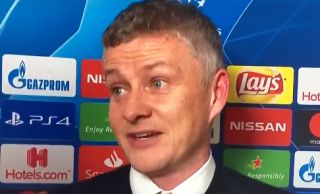 Man Utd produced a thrilling comeback against Paris Saint-Germain on Wednesday night to book their spot in the Champions League quarter-finals.

After a 2-0 defeat at Old Trafford in the first leg, their hopes of advancing looked slim as Ole Gunnar Solskjaer suffered his first defeat as interim boss.

However, they turned the tie on its head this week as they secured a 3-1 win in Paris, with Marcus Rashford’s dramatic late penalty sending them through to the quarter-finals.

Few genuinely believed that the Red Devils could roll back the years and produce another memorable European comeback, but as seen in the video below when he spoke to BT Sport immediately after the first leg, Solskjaer was already in inspiring form.

Insisting that “mountains are there to be climbed”, the Norwegian tactician seemingly didn’t doubt for one second that his side could turn things around and advance.

While it needed the late intervention of VAR to help get them over the line, it was still a great performance from Man Utd and their temporary boss, who is continuing to prove to be inspirational as they turn their campaign around with 14 wins in 17 games under his stewardship.

? Feb 12th
Solskjaer: "Mountains are there to be climbed."

Ole called it and his players delivered ?pic.twitter.com/Xm1ldYyfIR