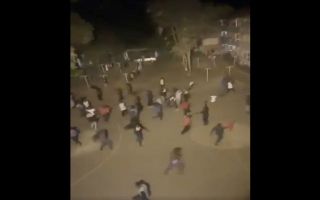 Manchester United supporters from Kenya celebrated long into the night after watching their team knock Paris Saint Germain out of Europe.

The Red Devils served up a stunning performance in the Champions League on Wednesday night, overturning a 2-0 first leg deficit by securing a 3-1 win at the Parc des Princes to progress to the quarterfinals.

A Romelu Lukaku brace either side of a Juan Bernat goal for the hosts put United within touching distance of the promised land before Marcus Rashford sealed a stunning victory from the penalty spot in the dying moments of the match.

We have a feeling you’ll want to watch these goals again ?

Check out highlights of our dramatic win in Paris in the #MUFC Official App now:

Fans in Kenya went wild after the final whistle, singing at the top of their lungs “Ole, Ole, Ole, Ole!!” in tribute to United’s caretaker boss Ole Gunnar Solskjaer, in amazing scenes which highlight the club’s global appeal.

Check out a clip of the supporters going crazy on the streets of Africa below, via Twitter.

Man United fans celebrating tonight’s win in Kenya. The love for this club is universal ? pic.twitter.com/eVWfc71SNe

Ole this are your fans from Kenya pic.twitter.com/VosiRI3KqR