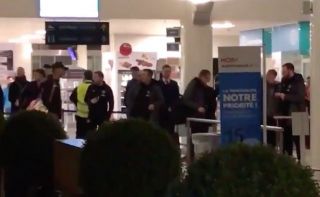 Arsenal suffered a disappointing 3-1 defeat to Rennes in their Europa League clash on Thursday, and these travelling fans clearly weren’t impressed.

Things started well for the Gunners in the first leg of their last-16 tie, with Alex Iwobi grabbing an early away goal to give them the advantage.

However, after Sokratis was sent off in the first half, they shipped three goals to now have real work to do in the reverse fixture next Thursday to ensure that they advance to the next round.

While it was undoubtedly a bitterly frustrating night and a missed opportunity in many ways given that they could have built on that early lead and taken full control of the tie, there is arguably little excuse for this kind of reaction.

As seen in the video below, you can hear a group of disgruntled Arsenal fans aim abuse at the players as they’re passing through the airport on their way back to north London.

A few look across at the fans to see where the noise is coming from, but most choose to ignore them.

While there’s being frustrated and upset over a result and having a right to express your feelings having paid to go watch your team abroad,, it surely isn’t an excuse to throw unnecessary abuse at the players from a distance as they’re heading home either…

Players who were arriving at the airport at Rennes are getting abused by some of our fans. These are grown men.
Absolutely embarrassing stuff ?. (? :- @MilesCrallan) pic.twitter.com/evum5zE9MT