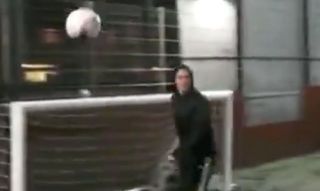 Jose Mourinho has some spare time on his hands as he remains out of management, and he’s spending some of it playing 5-a-side football it appears.

The Portuguese tactician left Man Utd in December, and has since been spotted at various events while doing plenty of punditry work.

With his new role with RT, a segment on his show will see him play 5-a-side football alongside his son, with the broadcaster giving us a little sneak peak into what Mourinho has to offer.

As expected, it looks as though he loves dictating the tempo and controlling things in defence, calling the shots from the backline before being spotted between the posts.

Speaking after the game though, the former Real Madrid and Chelsea boss conceded that his son is better than him, but that he cherishes the opportunity to play football with him after doing so for so many years when he was younger.