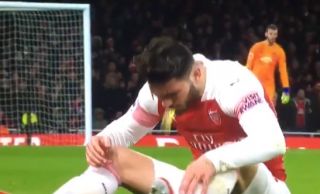 Watch the video below as the Bosnian spits a *lot* of yellowish liquid out of his mouth and looks distinctly unhappy with life.

Did Kolasinac just get sick? ? pic.twitter.com/sX1xzY0kTn

Was Kolasinac playing through sickness, or did he just respond really badly to a challenge?

Whatever it is, fair play to him, it’s an impressive haul that he shrugs off fairly casually.

Kolasinac has had a fine game today for Arsenal in a much-needed big-game performance against Man Utd at the Emirates Stadium.