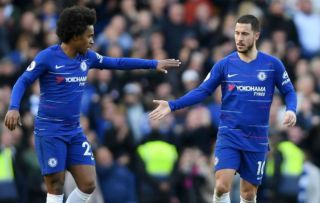 The Belgium international’s moment of brilliance single-handedly gained Chelsea a point at home to Wolves when they looked to be heading for a bad defeat against the newly-promoted side.

However, Sarri was clearly not entirely satisfied with how Hazard played, as he criticised the performance of his attacking players at Stamford Bridge when he spoke in his post-match press conference.

While it’s easy to see what the Italian tactician means, it perhaps seems a bit unwise to be singling out Hazard in this way when he’s just saved the game for you.

It also remains to be seen if the former Lille star will end up staying at Chelsea this summer as he is yet to sign a new contract with the Blues.

This would put him in the final year of his deal next season, so the manager may want to be a bit more careful about criticising him after big performances like this.

Here’s a look at Sarri’s quotes, via Goal’s Nizaar Kinsella:

Sarri on Chelsea's attacking issue: "Today we needed to move the ball faster, we needed more movements without the ball, more movements into space behind the line, we played at five touches, so if there are no spaces, it is difficult to play with 5/6 touches." #CFC #CHEWOL

Sarri on Hazard: "He can solve the game in any moment, but he needs more movement without the ball and more movement around the pitch. This is valid for all players, especially offensive players." #CFC #CHEWOL