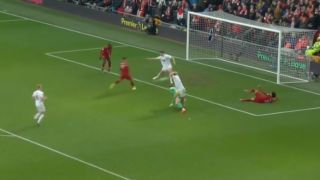 Roberto Firmino has his second goal of the afternoon to make it Liverpool 3-1 Burnley in this Premier League clash at Anfield.

While Jurgen Klopp has complained about the wind in the past, it might have done his team a big favour here as Mohamed Salah intercepted an awful goal kick.

The Egyptian then ran on and the ball eventually found its way to Firmino for an easy finish from close range.

This should now put the game beyond Burnley, who had given the Reds an early scare with the opening goal straight from a corner in the opening stages at Anfield.