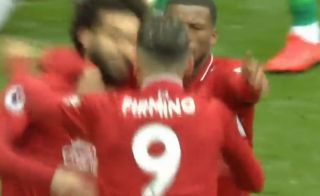 Roberto Firmino’s goal has levelled things up for Liverpool against Burnley in today’s early Premier League kickoff at Anfield.

The Reds are under big pressure to win after Manchester City’s win over Watford yesterday, but got off to a nightmare start when Burnley netted straight from a corner.

Firmino has finally contributed something, however, after a poor run of form of late, tapping in from close range to make it 1-1.

Liverpool fans will hope this can turn things around for them at Anfield today as they look to keep up the pressure on title favourites Man City.