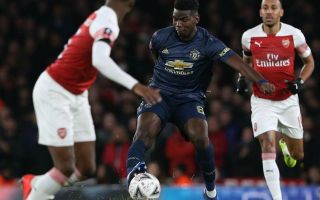 Manchester United fans mostly seem to agree that Ander Herrera is being missed in today’s game against Arsenal as the match comes to half time.

The Gunners have dominated in midfield, with Granit Xhaka having one of his better games, even without considering his somewhat fortuitous goal to give them the lead early on.

Meanwhile, Paul Pogba and co. have not really been at the races for Ole Gunnar Solskjaer’s in-form side, who look like they could do with more bite and energy in the middle of the park.

Herrera has been a top performer for Man Utd under Solskjaer, and it’s very clear they miss the Spaniard today as the likes of Nemanja Matic and Fred just don’t look quite in the same league.

Of course, the Red Devils still have enough in this side to come away with a result, but for now many United supporters are unhappy with how Pogba and the other midfielders are playing and believe this could be a different game with Herrera on the pitch.

Pogba and Matic are invisible. Wake the fuck up

Miss Herrera this midfield is fucking too light

We are missing Herrera

Need Herrera in there ?

Pogba needs to step up. Didn't play well over the last while without Matic and Herrera. Not doing much at the minute. He seems to be coming down from the new manager high quicker than the others.

Absolute fucking donkey shit #ARSMUN #MUFC matic and fred too slow in the middle, pogba lost at sea and dalot ain't done shit! Martial on 2nd half and a 433 please. Thank you. Good night Vienna!

Mehn Herrera is underrated. This Fred is pure trash.#arsmun

We're missing Herrera more than anyone