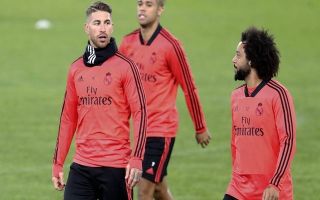 Two of Real Madrid’s biggest stars were involved in a heated training ground bust up yesterday after this was said, there isn’t much harmony in the Madrid camp it seems.

According to Spanish outlet AS, Marcelo said “now, you’re gonna suck me off” after his team won a mini-game in Madrid’s final training session before their clash against Real Valladolid yesterday.

Club captain Sergio Ramos then felt the need to step in and reprimand Marcelo for his comments, it’s understood that Ramos saw this as Marcelo showing a lack of respect to not only the rest of the squad, but also to manager Santiago Solari.

AS also highlighted in their report that Marcelo’s relationship with a significant number of his teammates has become ‘muddied’ recently, the Brazilian star has dropped out of the starting lineup under Solari and it’s understood that some of his comments in the dressing room haven’t gone down too well with his teammates.

According to Marca, the pair weren’t at each other’s throats for too long and the situation was resolves relatively quickly.

As both players are senior members of the squad, it’s absolutely essential that a situation like this didn’t escalate any further.

Here’s a summary of what happened during yesterday’s training session:

After winning a mini match in training on Saturday, Marcelo shouted, “Now you’re going to suck me off!” It was at this point that Ramos, on the other team, intervened. His relationship with some of his teammates have deteriorated since he’s been benched this season. [as] pic.twitter.com/shGWmL8NlZ

Solari will be hoping that their recent spat doesn’t affect the rest of the team as they prepare to challenge Valladolid tonight, Los Blancos are in desperate need of a convincing win following a turbulent last two weeks.