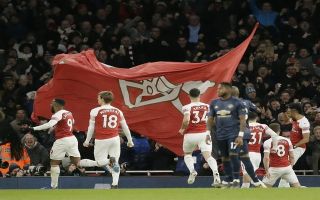 The Arsenal social media admin was on absolute fire after the Gunners’ 2-0 win against Manchester United today, take a look at them brutally trolling Solskjaer and United below.

Arsenal fans have been crying out for a big win against their rivals Manchester United for some time now – nearly two years to be precise. The Gunners had failed to beat United in the two sides’ last four meetings so today’s 2-0 win was much-needed.

Arsenal’s recent losses to the Red Devils have also seen them shamed by the likes of Jesse Lingard – on numerous occasions might we add. The Gunners needed to dish out some payback to United, Lingard recently tagged the Emirates Stadium as his ‘dancefloor’.

The Gunners were in desperate need of clawing back some ‘meme points’ if that’s what you’d called them, and their admin certainly delivered the goods today.

Unai Emery’s side have now moved ahead of United to fourth place in the league, maybe this is the big win that Arsenal have been crying out for.

It will give the side the momentum they will need to come out on top in a battle for a top four finish against Chelsea and United.