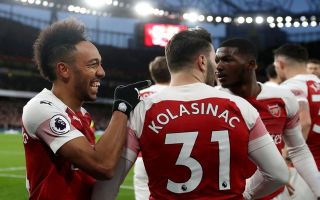 The star’s certainly aligned for Arsenal against Manchester United this evening, one of their stars even predicted the outcome of the game perfectly last week.

The stakes were as high as they could be for both sides heading into today’s clash, Unai Emery and Ole Gunnar Solskjaer both needed a win in order to better their respective side’s hopes of finishing in the top four this season.

Arsenal were very tidy today, their defence – for once- looked very comfortable in a big game and centre-back Sokratis Papastathopoulos was a big reason why the Gunners came out on top – not just for his performance on the pitch though.

The Greek star gave Arsenal talisman Pierre-Emerick Aubameyang the inspiration and motivation he needed to bounce back from his crucial penalty miss against Tottenham last weekend.

In a Twitter post the defender said that his ‘brother’ (frate) would give the Gunners the win against United. A pretty big claim to make – fortunately it paid off. The pair were also teammates at Borussia Dortmund so it’s not surprising to see that Sokratis jumped to Auba’s defence last week.

Aubameyang scored a penalty against United in the 69th minute of today’s tie, this was enough to seal a win for the Gunners. Sokratis will likely win some plaudits from fans for his prediction and his standing in the dressing room couldn’t be higher, given the character and spirit he’s demonstrated recently.

Check out Sokratis’ post from last week below, the Gunners can thank Mystic Papa for the win today:

One of the best players and friends I have played with. Next week you gonna give us the win frate @Aubameyang7 ??? pic.twitter.com/pJ2ixQwQwW

The Arsenal admin picked up the tweet and started the Mystic Papa nickname:

Unai Emery’s side have now moved ahead of United to fourth place in the league, maybe this is the big win that Arsenal need to give them some momentum as they head into a battle with Chelsea and United for a top four finish.