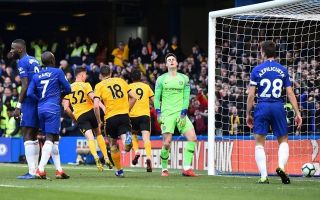 Unfortunately for Chelsea’s fans this afternoon, it was more of the same from the Blues against Wolves today. The side struggled to make their possession count for something.

Chelsea’s style of play seems far too predictable and Wolves nearly managed to come away from Stamford Bridge with three points this afternoon – if it wasn’t for a last gasp equaliser from Eden Hazard. Check it out here.

The Blues tend to lack energy and creativity for large portions of their matches this season, Maurizio Sarri’s side are struggling to create enough clear-cut chances to make their dominance of possession count.

This is starting to feel like a broken record, as the Blues aren’t making the changes in their game that fans are calling for every week.

Here are the stats from the matchup:

Late Eden Hazard strike salvages a point for Maurizio Sarri's side after Raúl Jiménez scored with Wolves' only shot of the game. pic.twitter.com/Pbm9OCWw7C

Check out some reaction to the side’s performance below:

Eden Hazard, you’re the best player in the league but you’re papering over the cracks.
The possession frenzy predictable Sarri-ball needs to adapt to our strengths, Kante is the best DM and whenever we don’t go crazy for possession(Anti Sarri ball), we play way better.

Didn’t do enough to win the game outright. Only started shooting from the 80th minute

Better than nothing but if we’re serious about getting top four we need to win every game at home we have.

Sarri out!!! No questions.

Wouldn’t celebrate a point If I was you. We deserved nothing from the game. Our performance all in all was rubbish. If we want to finish in the top 4 we have to perform better than that !!! Missed opportunity for sure…

So lucky to have Hazard. Absolutely dreadful performance…

The Blues had a glorious opportunity to leapfrog their top four rivals today but they were largely disappointing, a win today would’ve done wonders for their hopes of qualifying for the Champions League next season.

Winning the Europa League to qualify for the UCL is a massive gamble to take, the Blues need to get their points on the board and push for a top four finish in order to secure qualification.