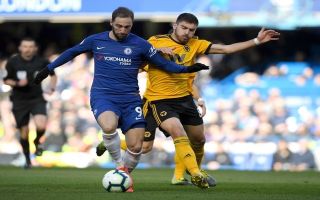 Chelsea have been frustrated by Wolves in the first-half of this afternoon’s clash, the Blues have failed to make their dominance of possession count so far.

Chelsea’s style of play seems far too predictable and it seems like the Blues are being frustrated by their opposition far too easily this season. The main issue is the lack of creativity that is coming from midfield, the players just seem to be ticking by and not much is happening.

On-loan striker Gonzalo Higuain has looked lively so far, the Argentine has fashioned some shooting opportunities for himself in the opening 45 minutes – but nothing special enough to see it’s way past Wolves’ organised defensive line.

Wolves have managed the game expertly so far and Chelsea need to get something going very early into the second-half, if they are to have any hopes of getting three points today.

Check out the stats from the first-half, Chelsea have so far failed to make their possession count for something:

One-way traffic in the first half but Chelsea unable to find a way past the Wolves defence. pic.twitter.com/ud0exlEiEB

Check out some reaction to the side’s performance so far below:

To slow on the ball !

– Complete domination; just nothing to show for it.
– No one’s played poorly, just no one has completely stood out either.
– ‘Park The Bus Wanderers’ ?
– A bit more creativity/dynamism needed in our midfield right now. RLC on at HT perhaps?

Yes Wolves is compact and solid at the back but Why not try something different if we can’t penetrate? We can try to shoot from outside the box or whip in crosses you know, instead of doing the same thing that’s not working over and over again

Very slugish game by our team. RLC & CHO need to come on pls if were to be attacking minded. Sarri is still our problem. No plan B pic.twitter.com/5DoPf9cYRC

Kovacic needs to come off – pointless having 3 players that can’t score in midfield.

Cesc had more creativity than all the chelsea midfielders combined. Shame Sarri never saw that. But Kovacic and Jorginho need to have the balls to play incisive through balls instead of just playing the safe pass.

RLC AND CHO NEEDED IN THE SECOND HALF.

Not convinced by sarri ball…

This whole team needs to be deleted.

The game is boring

Chelsea have to capitalise on the opportunity they are faced with today, with Arsenal hosting Manchester United later today – one of Chelsea’s rivals are bound to drop points – giving the Blues the chance to leapfrog one of the teams they are battling for a top four place with.

They really can’t afford to slip up against Wolves today.