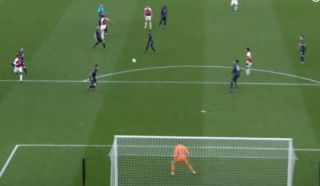 The Spaniard was beaten by a long-distance effort from Granit Xhaka, with the Swiss international’s attempt undoubtedly changing direction on its way towards goal.

Nevertheless, it arguably didn’t deviate enough to leave De Gea so easily beaten, with the ball finishing up relatively central as the Man Utd goalkeeper had already committed himself to his left side.

Naturally though, it did cause debate in the Sky Sports studio, as seen in the video below, with Neville insisting that it’s “not even a debate” that De Gea should have done better, while Carragher seemingly defended him from criticism.

The pair have often clashed in their current roles but with a hint of sarcasm and a more jovial atmosphere, however it appears as though they genuinely disagreed and weren’t impressed as Carragher even asked: “Why has everyone got to have the same opinion as you?”

Ultimately, replays would suggest that a goalkeeper of De Gea’s quality should arguably have done better to keep Xhaka’s strike out.

Nevertheless, he hasn’t been guilty of making mistakes for some time and so perhaps the benefit of the doubt has to be given to him given he is world class at what he does and it was essentially a freak-ish goal to concede in a 2-0 defeat for the Red Devils.